Exploring the Waterways of Ontario

In the summer of 2020, Cycle Canada is operating a selection of mini-tours to help cyclists find a change of scenery during the challenging COVID-19 times. These tours are from one to three days, typically with two nights indoors at one location. The tours are conducted practicing social distancing and limiting group size to between 6 and 10 riders. These tours are also offered on a self-guided schedule with flexible dates. Please email Cycle Canada to learn more about these and their one week tours: sweep@cyclecanada.com

The Tay Way is a ride along the shore of Georgian Bay in Lake Huron, from Duck Bay to Midland. The ride explores part of Turtle Island, the indigenous name for Earth. It’s also a ride steeped in the history of colonial Upper Canada and the early industrial years of the new Dominion of Canada. The route through time is a bike path. Most of this area is in Tay Township. Tay, a regional municipality, was named after a pet dog of the wife of an early colonial governor of Upper Canada.

Our day trip along the paved path starts in Waubaushene on the shores of Georgian Bay. We head west through a series of settlements for summer cottagers and retirees. Turtles are still there and residents maintain wire mesh hatcheries along the edge of the path. The box-like wire structures protect baby turtles before it’s time to make a dash for the water.

Waubaushene is where the Severn River empties into Georgian Bay. The waters connected indigenous communities for thousands of years. The Severn is now part of a canal system that starts with the Trent River at Lake Ontario. In the colonial era the waterway allowed marine access to the interior of the continent.

Midland, at the western end of the path, was a shipbuilding centre in industrial times when steel replaced wood for hulls of big boats. At Port McNicoll, on the east side of Midland, you can see the S.S. Keewatin, a passenger steamer from the era of the Titanic. It is the only steamship remaining of its type and now is floating museum. When in service she carried passengers and freight between Port McNicoll and what is now Thunder Bay in Lake Superior.

Ste. Marie Among the Hurons

A waypoint on the trail from a much earlier time is Ste. Marie Among the Hurons, a Jesuit settlement established in 1639. Then, it was an outpost of missionary objectives directed from what is now Quebec. Ten years later the mission was abandoned after a bloody battle between the Catholic missionaries and Hurons who saw the area as their traditional lands. The settlement has been rebuilt to create a walled enclave based on archeological details. A Martyr’s Shrine in the style of Roman Catholic churches in Europe is nearby.

With Midland as a way point, be sure to take time to ride around town to look at murals on the buildings. And not to be missed is the spectacular Trumpeter Swan sculpture at the waterfront.

Here’s a sampling of the trail conditions with maps and what you will see along the way! 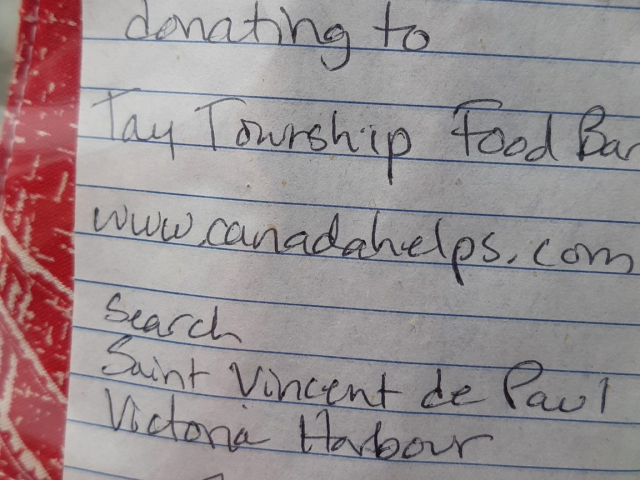 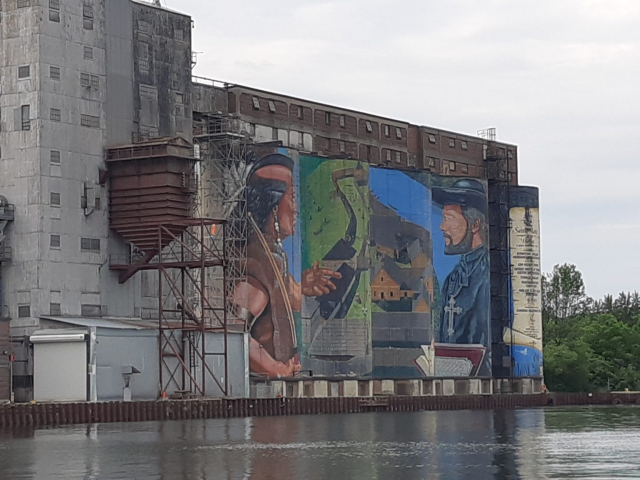 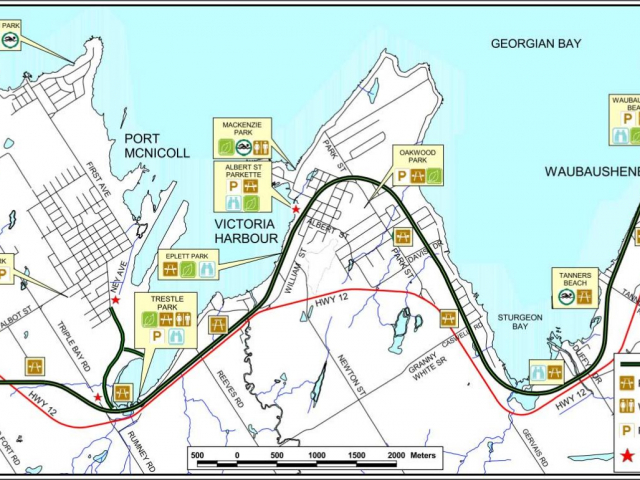 Looking to do this one day tour? Send us an email with your questions: info@velohospitality.com