A Ride through Quebec’s Eastern Townships

Tour Vert is a week-long bicycle tour that travels from Montréal to Québec City. It follows city paths and quiet side roads and stays in lovely villages and larger centres along the way. The photos in this account are from day one of our 2020 and earlier tours. Photos from 2020 unless marked otherwise.

Montréal, a City of Festivals

Cyclists meet in Montréal for the start of the tour and spend an evening in this fun town known for its festivals and a high standard of hospitality. Our boutique hotel is located in the heart of the city, close to the old port district and the new downtown. Each year Montréal hosts a series of outdoor festivals and exhibits that take over the city core in what is known as the Quartier des Spectacles. Sainte-Catherine Street is the main setting for these events and it is closed to motor vehicle traffic. In 2020 the regular schedule of performance events was not held but the street was still hopping with fun and excitement.

Relaunch Romance
Our Hotels are Open

On Day 1 of Tour Vert we leave the island of Montréal via the Jacques Cartier Bridge, which passes over the St. Lawrence River and St. Lawrence Seaway. The bridge is a major thoroughfare connecting Lîle Montréal with the St. Lawrence River’s south shore. For bikes and pedestrians it has a wide and well-separated lane. Stops along the way offer a spectacular view of the city and surrounds, a perspective that is difficult to appreciate from a motor vehicle.

Images from our 2019 tour including Saint-Catherines St. decorated for Pride, cyclists on the Jacques Cartier Bridge and the view the St. Lawrence Seaway showing the St. Lambert lock in greater Montréal.

Read more about the St. Lawrence Seaway and travelling through the locks here: The Seaway

After leaving Lîle Montréal we are quickly on dedicated cycle paths to get to Chambly. It’s a picturesque suburb beside the Richelieu River, which connects the St. Lawrence River with Lake Champlain. From Chambly we follow canal paths to Saint-Jean-sur-Richelieu.

The Chambly Canal opened for navigation in 1843, creating a commercial shipping artery for an industrial revolution that was on the horizon. When built, it was considered a horse canal. Horses towed barges on tow paths along each side of the waterway. Tow paths were said to be at least nine horses across. Now, those paths make for ideal cycling routes.

Along the Chambly Canal

Our first night’s stay is in the beautiful village of Venise-en-Quebec, on Baie de Venise at the north end of Lake Champlain. Venise-en-Quebec is known as a summer vacation spot and our stay is adjacent to the lake.

Venise-en-Quebec is a geographic crossroads of the Haut-Richelieu region when heading towards the Eastern townships. Below is a selection of photos from Days 2 to 5 of the ride.

Fans of detective novelist Louise Penny will travel through a landscape that inspired many of the locations described in her books. Knowlton, where Penny lives, becomes the fictional town of Three Pines in Penny’s novels.

The final day’s ride into Quebec City is almost entirely on dedicated off-road bike paths. The trails are gradually being paved and there remains only short sections that have crushed limestone surfaces.

Learn More about this Ride

Questions? Please write us at info@velohospitality.com 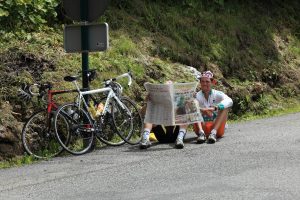