A Hub and Spoke Ride Based in Gananoque, Ontario

1000 Islands is a three day bicycle tour based in Gananoque, Ontario. The tour follows city paths and quiet side roads, visiting lovely historic villages and parks along the St. Lawrence River and Rideau Canal.

Photos in this account are from Cycle Canada’s rides in 2020. Riders stayed two nights in the lovely village of Gananoque, where the Gananoque River flows into the mighty St Lawrence. Après bike we were within walking distance of restaurants and parks. In 2020, services were limited to takeout or outdoor dining because of Covid-19. Service quality was excellent as local hosts went out their way to welcome visitors.

Garden of the Great Spirit

Archeological research shows that indigenous people inhabited the region surrounding Gananoque for 7,000 years. The area was known for its excellent fishing. Over millenia it has been known as “Garden of the Great Spirit” or “Water Rising over Rocks” or “Town on Two Rivers”. The region is considered the traditional lands of the Algonquin. After the American Revolution, also called the U.S. War of Independence, colonists loyal to the British Crown settled in the region.

Meeting at the Town on Two Rivers

Cyclists assemble in late morning in the heart of Gananoque. After a short orientation we head down the road for a picnic lunch at a lock on the Rideau Canal, the waterway that connects Canada’s early capital, Kingston, with the new capital, Ottawa.

On Day 1 of 1000 Islands we head north west from our inn and loop back to Gananoque. Our destination is the Rideau Canal where we have a picnic lunch in a park setting at Upper Brewers Locks.

The Rideau Canal connects Ottawa, the Capital City of Canada and Kingston. It is an historic canal that was constructed as a precaution in case of war with the U.S. Unlike many canals the entire system is made up of sections of canals that connect lakes and rivers. There are 47 locks along the canal and we’ll visit two of them.

Following the River to Brockville

On our second day we leave Gananoque to travel along a paved trail adjacent to the St. Lawrence Parkway. Originally built as a right-of-way for telephone lines it has been improved over the years to provide a mostly car-free cycling route that follows the St. Lawrence River between Gananoque and Brockville.

Kingston and and Howe Island

On our final day we travel to Kingston in farming districts via country roads. The terrain is flat and gently rolling. Kingston was Canada’s first capital city. In the mid-19th century the times were unsettled with Canada’s neighbour to the south. The town’s close proximity to the U.S. posed a military risk and the capital was quickly relocated to Ottawa. To this day historic 19th century cannons are aimed squarely across the river to the U.S. – now for demonstration purposes only !

After lunch in Kingston’s historic downtown we follow the river and then travel on and off Howe Island by ferry across the St. Lawrence River.

Learn More about this Ride

To learn more about this tour please visit the 1000 Islands tour information page.

Cycling in the Time of COVID-19

Read tips on cycling during the pandemic: Cycle Tour Protocols During COVID

Questions? Please write us at info@velohospitality.com 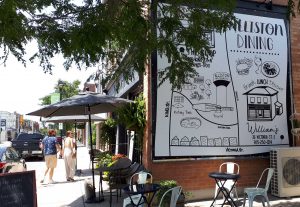